Hong Kong democracy activists struggled to be heard during Chinese President Xi Jinping’s three-day visit to the territory, raising concerns over infringements to the rights of peaceful protest and freedom of expression.

Days before Xi arrived in the city on Thursday, police placed giant barriers around Wan Chai near venues where Xi was staying or visiting. Police said around 9,000 officers – about one-third of the force – were deployed to protect Xi and other officials from terrorist threats. A series of arrests took place amid Xi’s visit. On the eve of Xi’s arrival, 26 democracy activists were arrested after scaling the Golden Bauhinia statue, Beijing’s gift marking Hong Kong’s transfer of sovereignty.

Some of the activists were detained for more than 24 hours, and released one by one after their lawyers requested a habeas corpus order. The last activist was released less than four hours before a hearing was due on Thursday morning.

On Thursday morning, outspoken localist Nakade Hitsujiko was arrested in the West Kowloon Cultural District – where Xi was scheduled to visit in the afternoon – for carrying a box knife and other tools. Police said Nakade may have been possessing offensive weapons.

During the same morning, police arrested three men for alleged criminal damage over three instances of graffiti saying “Hong Kong has been fallen for 20 years.” Localist group Hong Kong Indigenous said one of those arrested was a member. It claimed police threatened to arrest his family members if he refused to admit to committing the acts – and then allegedly arrested his father and younger brother.

It said police had searched their home and were seeking the mother. Police declined to respond to the allegation.

On Saturday, Labour Party members displayed a banner saying “I want genuine universal suffrage” at the Tsim Sha Tsui harbourfront. When they refused to take it down, they were arrested for allegedly obstructing public officers.

On the same day, activist Joshua Wong and others from the League of Social Democrats (LSD) attempted to protest at a flag raising ceremony that Xi was to attend, but said they were attacked by a pro-Beijing group in Wan Chai. Around 20 of the activists were arrested. The LSD’s Avery Ng and Figo Chan claimed to have been assaulted by officers on a police van. News outlet HK01 took photos showing an officer pushing Ng against the wall and pulling his hair in a police vehicle.

Ng told HKFP on Saturday that he was “kicked in the groin” twice. 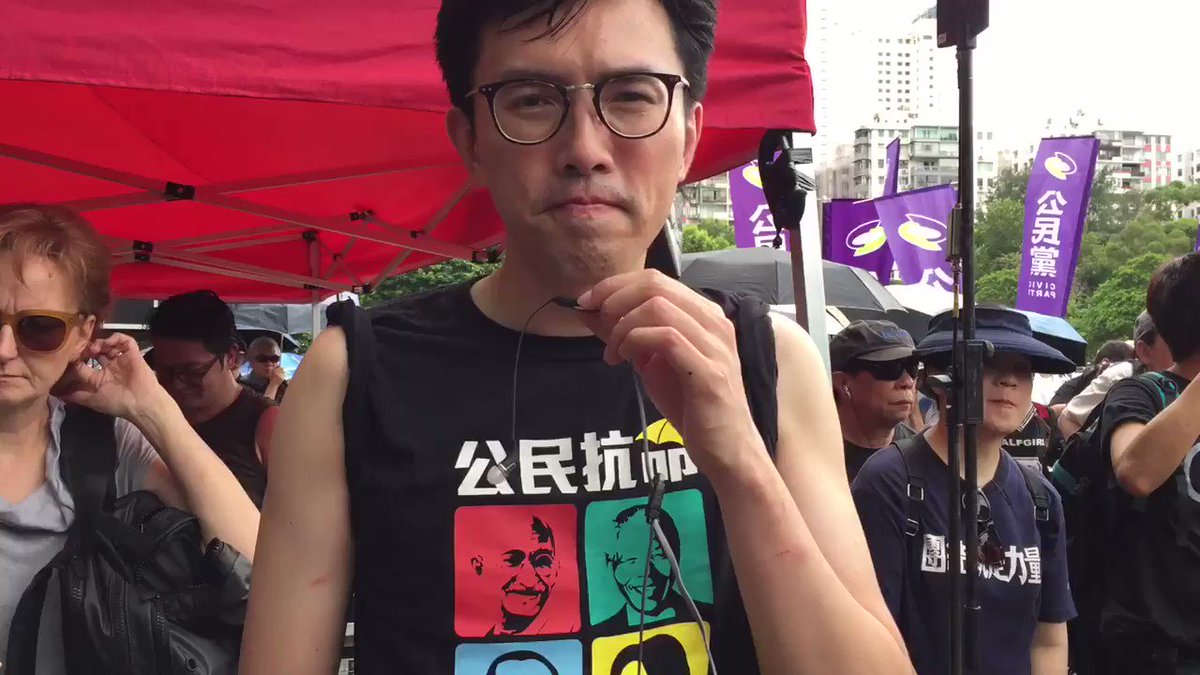 There were scratches on his arm and lower back, which he said were inflicted by police officers. Meanwhile, on Friday, police took away a car belonging to the office of lawmaker Lau Siu-lai on the basis that the vehicle had installed a front-facing camera, a DVD player and tinted windows.

Lau questioned whether the action was politically motivated, as such modifications are commonly seen in the city.

Police also appeared to have taken a stricter approach than usual towards protests.

The force banned pro-independence Hong Kong National Party from holding any assembly, citing public order regulations and possible violations of the Basic Law. The party’s convener Chan Ho-tin said he was told by officers that he would not be permitted to hold any event even if he moved it to another location. Despite the ban, the party decided to go ahead with a gathering on Friday evening, but called it off owing to a heavy police presence. The party said police had warned they would arrest members as soon as they began setting up.

Meanwhile, the Civil Human Rights Front was allowed to protest outside Telecom House in Wan Chai on Friday evening, but HKFP noted that the area assigned to the front was much smaller than that given to a pro-China gathering of a similar size a block away. It was also further from Xi’s hotel than where the pro-China group was stationed. A police media officer told HKFP at the time that they had closed off the area to stop more people joining the “unlawful assembly.” Local media cited sources earlier as saying that police officers were instructed to crack down on sensitive slogans and images in order to avoid “embarrassing” Xi. Chief Executive Carrie Lam said Saturday: “We have freedom of speech, freedom of expression, and freedom of assembly. So we respect these activities as long as they are conducted in an orderly manner.” But Maya Wang, senior researcher of NGO Human Rights Watch, told HKFP: “Taken together, these reports probably represent one of the worst assaults on Hong Kong’s freedom of assembly since the handover.”

“Ms. Carrie Lam must launch an independent investigation into the police handling of Xi’s visit, particularly claims regarding the assault and harassment of pro-democracy protesters, or she risks the public further losing its confidence in the independence of the Hong Kong police force.”

She added that the issue was wider than the police operation, as it appeared that “thugs and mainland security” had been involved in harassing pro-democracy figures.

Barrister Randy Shek of the Progressive Lawyers Group criticised the police for a “lack of self-restraint” when handling pro-democracy protests.

“The duty of police is to defend and enforce the law, but their acts have infringed upon our constitution,” Shek told HKFP. The Basic Law guarantees Hongkongers the rights to a range of freedoms, such as of peaceful assemblies and of expression. He said that though there are limits to these freedoms, the restrictions must be proportional and prescribed by law.

“What police have done over the past few days was to get rid of things that they – or they think the powers that be – do not want to see, completely ignoring the constitutional right to freedom of expression,” he said.

Shek also said the ban on pro-independence protests was “absolutely outrageous,” questioning how the police would know if the activists’ words would break the Basic Law.

“It is a question of constitutional law, not criminal law,” he said. “As far as I know, the assembly is to mourn the fall of Hong Kong and nothing about succession.” He added it was a question for courts, not the police. But Shek says there lacks an effective mechanism for accountability. Currently, an internal unit of the police force handles complaints against police. Critics argue that the unit is biased towards officers.

The activists may file a judicial review against the police, but Shek said it would mean little even if they won the case, as they would never be able to hold the protest on the original date.

“Under this system, there is nothing we can do. It is not a truly democratic society,” the barrister said.

Instead, he said, the key lies in the authorities: “The law is not a tool for those in power to rule over those without power. The rule of law means everyone is equal before the law, including those who have been given the power to make decisions.” “To be very honest with you,” he added, “I think the people most responsible for the deterioration of the rule of law are those in power and the police.”